How Does Laser Crown Lengthening Work

The portion of the tooth that protrudes above the gum is called the crown, or clinical crown. Sometimes certain people don’t have enough clinical crown of the tooth protruding, for either aesthetic considerations, or optimal dental health. It’s what is often referred to as a “gummy smile”.

Sometimes, it becomes necessary to lengthen the crown due to injury or decay, say when a tooth has been broken off along the gum line. For the dentist to be able to affix a porcelain crown to the broken tooth, more crown or part of the root must be exposed. Crown Lengthening is the removal of portions of the gum to expose more of the crown. This can be achieved in two ways, either through surgical procedure or, secondly, by the use of laser technology.

How Does Laser Dentistry Work?

Lasers emit light at various wavelengths. In addition to the emission of light energy, lasers are also able to concentrate that light energy into extremely small spots of light. Most dental lasers work in a range of 0,25mm to 1,25mm. As the human body is composed of 70% water, and this is particularly true of soft gum tissue, the tiny spot of light vaporizes the tissue by using the body’s ability to absorb laser light, which in turn generates heat. The amount of light absorbed is in direct proportion to the wavelength emitted.

In laser crown lengthening, the laser can be used either to ablate (vaporize) the tissue required, or to use as one would a scalpel. In both cases, it is the exposure of more tooth material that is required.

The laser light can either be emitted continuously or it can be emitted intermittently as a pulse. The pulse method gives better control by the dentist and helps him or her to monitor the effect of the heat, both at the point of contact and in the surrounding tissue. Laser dentistry can be done on soft tissue, such as gum tissue, and hard tissue such as bone equally effectively. 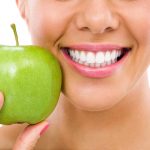